For any php performance freak, include_once has been a pain in the neck for a long time. In a previous post I had talked about how the common workarounds affect something like APC. With the release of APC 3.0.14, there is a decent workaround which doesn't require any changes to the php code. But first, let me drag out another almost-workaround to the whole include_once problem.

rinclude_once: So we create a new function for the purpose. Let me just call it rinclude_once and use that everywhere. The function takes in the filenames, pushes it into a hash before including it.

This bit of code works - but only for absolute filenames. I put it through its paces without apc against include_once. Surprisingly, without APC, this code is slower than the php engine's include_once checks. That somewhat makes sense because the extra include for the rinc.php makes a slight dent into the compile and execution time, overshadowing the cycles wasted in the include_once syscall land. 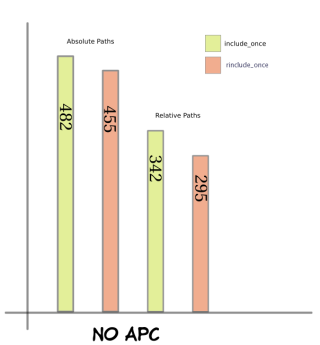 Excluding the slight blip in performance, both the bits of code are nearly neck-to-neck. The real cost of include_once is only evident when you throw in APC. For every file which was included, include_once opens the file before checking for multiple inclusions. The extra system call shows up in the graph below. But the rinclude_once does not work at all for relative path includes (the second pair of bars) and therefore trails badly in this race for performance. 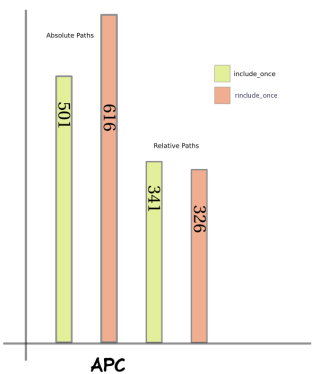 include_once_override: The solution to this problem is freakish. APC meddles with the brains of the Zend interpreter and inserts its own version of ZEND_INCLUDE_OR_EVAL opcode handler. The new handler does not indulge in the gratuitous fopen idiocy present in the default handler (but it does fopen once) and checks for the filename in EG(included_files) hash before doing a normal include() (thank pollita for that). And it should come as no surprise that the C module outperforms the php land equivalent. 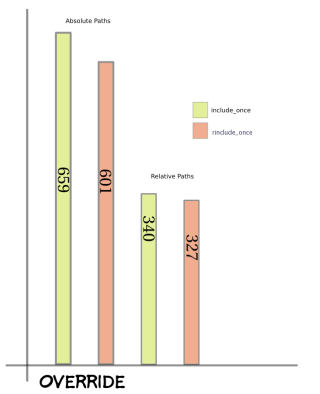 But all of these only work for absolute paths as the pathetic numbers on the relative path includes shows. That is where the path canonicalization kicks in. In APC's nostat mode, the filenames have to be absolute paths for the mode to be useful. But rather than force everyone to modify their include lines, APC rewrites the constant strings into the corresponding path names, after lookup. Essentially it converts all relative path includes, such as those from the pear paths, into absolute path includes. This works well with the stat=0 mode because file modifications are ignored after caching. 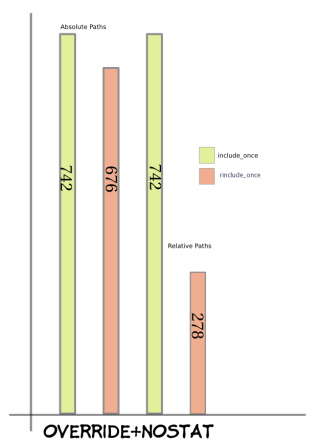 At last, we see both the relative and absolute includes touching the same level of performance - because they are no different from each other in opcode land. But as you can clearly see, that does not improve the performance of the relative include for the rinclude_once because it does dynamic includes. The opcode cache cannot determine what the value of $file will be for the include_once($file); line and cannot optimise that. The performance actually takes a dive because the relative path name passed in has to be full resolved for every request.

But having said all this, the same benchmark with plain includes is faster than any of these. I think there is a fair bit of optimisation left in this beast, but what is needed for that is the rest of the world to disappear while I code. Deep hack is hard to achieve when you're a ....