Dr Susan Blackmore wrote a very nice book called - The Meme Machine. Essentially it describes that the next form of self-replicating life to evolve are the memes which exist orthogonally from the carrier minds in just the same way organic life lives in comparison to the inorganic matter.

So let me follow up on the latest meme doing the circuit. Yes, the superhero quiz.

You are Batman
And I get a super hero who has no super powers. Well, back to finishing that 'absolut anger' pic.
--
Now, release your anger! Only your hatred can destroy me!

Disclaimer: I work at Yahoo! and opinions expressed here are truly my own except for the mails quoted, in which I had no part at all.

This is quoted from a thread about Guido Van Rossum joining Google and proves that some people have a sense of humour. This is starting from the fourth thread to spawn off. The subject line stays the same through out the thread.

Of course by then the language wars started :-

But again the C programmers prove that they rule ...

C++ programmers try to top the effort at simplification - I am too embarrassed to push that code here right now. It is a bunch of code with templates and operator overloading. And finally the killer discussion ...

Friday nights, eh ? It was as if the entire crowd said - who cares whom Google hired, let's discuss important things like where to put braces.

How about a command line xmms ?

I usually work on the command line. 80x25 columns are a lot easier to read than the X terminals with fonts. With my old box, I used to use mpg321 to play music on Alt+F6 terminal. mpg321 sucks totally here - but xmms works well, except for an application xmms uses obsolete OSS audio interface warning in the kernel. Also these days, a lot of what I have are .ogg files. I don't really like mplayer - mainly because it doesn't let me enqueue songs, like xmms does. I could use xmms easily, if I didn't have to switch back to X to skip a song or reduce the volume.

Necessity is the mother of invention, but I didn't have to invent an entire media player here. I had the xmms-remote code in my distfiles directory and I started poking in there. Before soon, I discovered that I had python bindings installed as well. The API is amazingly easy to use. I wrote the xmms code in about 10 minutes - doing curses without any documentation took some time (thank $deity for the test_curses.py) 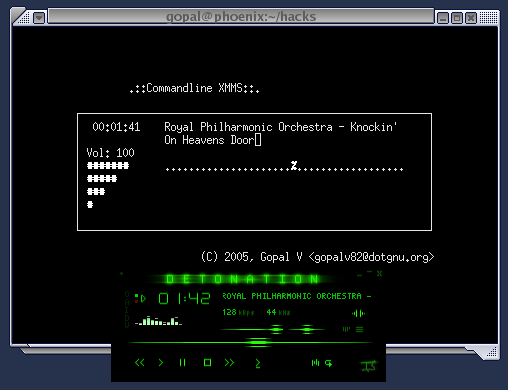 You can get my original 100-odd lines of cxmms.py. It is pretty much self-explanatory, except for the gratuitous use of lambda. Also it is a good example of how to wait for user input while other screen updates are required. And I want to use the j search shortcut - any volunteers to hack that into the current code ?

It was now 4 AM saturday morning. Sleep is slowly starting to become an optional requirment for me. I went back to the bed and picked up the book to continue reading and the next page had these lines in it.

I got distracted by this while I was hacking away in jit-interp.c trying to fix stack allocation ordering. Reminds me of the last chapter of So Long and Thanks for all the Fish.

Maybe I should trade in this life and ask for a refund ?

--
There was a point to this story, but it has temporarily escaped the chronicler's mind.
-- Douglas Adams

RAID-0 has been causing problems for me over the last few days. Finally I opened up the bloody box and re-connected the two 200 GiB hdds to the main SATA controller. Took some time to actually push all the data onto a borrowed 250 Gib usb hdd - before I broke up the RAID-0 setup. After all that, now the system is back to normal.

Looks like I can finally throw out Fedora Core 3 out of the box.