Recently, I've seen a lot of serious photographers start to watermark their images. I'm not one of them (yet), but I hacked up a quick script to watermark a photo in gimp without much fuss. Basically the script lets you paste a transparent image on your image and without actually using a UI.

To install, copy the watermark.py to your ~/gimp/plug-ins/ and chmod +x it. And to use in batch mode, you'd probably do something like this :-

A more sophisticated invocation would avoid spawning a new gimp instance for every image edit and would truly operate in batch mode.

Now that truly shows the power of small bits put together, with the odd bug thrown in for good measure.

--
Great acts are made up of small deeds. 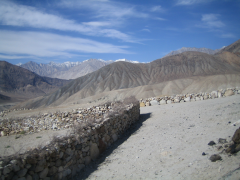