To take Arms against a Sea of troubles

This is perhaps the darkest week of the year - every year since 2006.

A decade later, once again, I feel like nothing about me will be the same again.

This new sense of purpose I feel is a few months old, sleeping a few feet away.

The baton is passed, not quite yet and I haven't let go.

Not for me, of course.

Today's the day when the burdens of all the what-ifs of my life becomes unbearable. The day I work up a year full of courage to face. A day which I devote to despair, for I leave no room in my life for it otherwise. To lay myself bare to all the demons of my mind. And survive.

Four years ago today, I lost a father. And today, I will remember the greatest lesson he ever taught me.

--
It seems to me most strange that men should fear;
Seeing that death, a necessary end,
Will come when it will come.
-- William Shakespare, "Julius Caesar"

--
We are all so much together and yet we are all dying of loneliness.
-- A. Schweitzer

A Year in Silence

It's been a year.

A year, a really long year.

--
It is a sobering thought that when Mozart was my age, he had been dead for two years.
-- Tom Lehrer

Yeah, I had a father.

And then last saturday, I didn't.

May his soul rest in peace.

--
The future is interesting because I am going to spend the rest of my life there. 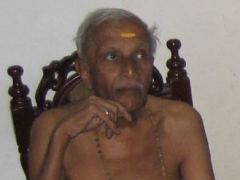 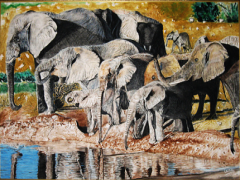 For the last few days, I've been extremely busy. I've been running around to do so many things. The unemotional machine that I have become, had to organize the memorial service, take my dad to the doctor, pick up relatives from wherever they land up in Trivandrum and essentially be there for everyone. But all that's done.

Now that I can actually sit down, the reality of the situation is starting to seep in.

--
It's not reality that's important, but how you perceive things.

The Passing of a Man

I do not write this entry for myself. I write it on behalf of the soul departed. But when I climbed onto that bus to Cochin on saturday I was headed for a quiet sunday at home. But before I set foot in Cochin, I received the news. My uncle - V.M Venugopala Menon is no more. After nearly a decade of struggling with diabetes and its complications, he finally succumbed to the silent embrace of death sometime during the early hours of sunday.

For nearly eight years, he had a daily dose of human insulin to keep his blood sugar under check. During my final year in college, he lost a toe and would have nearly lost the foot as well. Ever since mid-2003, his kidneys had started to fail. But he was a man of iron will and still went ahead to enroll as an advocate, travelling nearly the length of Kerala to attend the ceremony in Kasargode, lugging a peritonial dialysis kit. To have that tube jammed into his lower stomach and have the liquid pumped into him was something he hated. But the moment the peritonium lost the osmotic qualities, the horrors began.

When I saw him month after month, he seemed to grow shorter and weaker. The haemodialysis which started off on a weekly basis, slowly became a necessity every other day. A complete kidney dysfunction, combined with the diabetic's slow healing, totally ran riot in his system. To see him on that wheelchair with his swollen feet, bitter about the world in general, yet prepared to fight till the end, if only for his children. His resolve only grew stronger as his health deteriorated.

We've always had our differences. But the blame is often quite evenly distributed in that. Of course, in our last conversation he probably forsaw this day. He was talking about the things he had left to see - my cousin's marriage, her brother's job. And then he said "Marikkenda samayam varumbayuthakum, ethokke nadakanam". And yet, didn't.

Maybe it was all for the good, to not let a man suffer so on this God's earth.

This day, back in 1981, my parents tied the knot. And then set about working hard and raising a family. Through the hardships of their initial years, through all the uncertainities of my health, studies and through all the recent turmoils and health scares - they've held fort and been terrific role models for me.

--
We have not inherited the earth from our parents,
We've borrowed it from our children.