There are times when all things come together. Yesterday was one of those days, when we all piled onto spo0nman's balcony to watch the football on a big screen. After pulling together sabiokap's TV, a cable connection and a projector on rent, we had our own party at midnight. Despite premshree preparing various cocktails (ok, it had coffee, kiwi fruit, watermelons, vodka, rum, wine and beer in it), we all managed to have a lot of fun. We watched the match, into extra time and till Cannavaro lifted up the cup. The absolute shocker was of course Zi Zou's head butt, but apparently Materrazi should've seen it coming. What ever goes around, comes around.

But lots of fun and sugar (*giggle*).

--
There are no winners, only survivors.

A Party for New Year

After much deliberation over What do you on New Year's Eve, finally decided to crash at spo0nman's place. The events that followed are as follows.

4:20 PM, My house: Call from sabiokap, asking me to come quickly. I head over there and find that I am needed to watch the Rajma while the other two head out to shop for meat and drinks. And of course, they both leave their laptops in my custody :)

Actually, sabiokap can cook. Unlike your truly, whose talents begin and end with making instant noodles (and coffee). My role was restricted to peeling and masala duty after the rajma was done. teemus was more of an observer, except for the garlic peeling

The food ended up being surprisingly good. Or maybe it was because I hadn't had anything to eat since friday night. But whatever, the food was simple, well cooked and I ate a lot (which is definitely the test of good food).

After the cooking was done, we settled into the main room with laptops. We got into playing music and of course it isn't a party till we play bad seventies pop. With teemus leading with Mickey and all that. Not to forget the smokes and drinks too.

Then chilled out and tried to watch a movie. It turned out to be a mushy romance - so we ended up watching Madagascar instead. Oh, and we made some awesome black coffee. I drank about a litre of coffee that night (which I regret now). I was laughing my head off listening to I want to move it, move it.

The actual new year was spent on the freezing roof (with the cold wind from the lake), watching the fireworks going off all around the city.

We had way more fun because we left all the plates unwashed till the next year (and when I left the house on sunday evening, they were still unwashed). 2006 looks quite an interesting year to me ... Full of pizza, wi-fi and friends.

Then I headed back home - only to reach home after a 3 hour walk, after getting lost in Jayanagar, going round Lal Bagh the wrong way from west gate. Anyway, the year looks quite promising - quite promising indeed.

This saturday, we had our Yahoo year end party. Assembling the crowd outside office gave us a good idea of how much we've grown and how many people I don't know in Yahoo !. I met at least 5 people whose name I had no idea about. But the party got boring very quickly. First of all there were no drinks till 7. I am not a drinker, but sitting near drinkers who are deprived of drinks is not a place I want to be regularly. We decided to give Club Cabana a miss till dark fell.

Yathin was headed out to Nandi hills in his Skoda (sweet). Because it was a small car, we raced to the car which was sitting out side the resort. After jumping a hedge and running premshree into a gate, I managed to get there first and got the front seat.

I don't like cities. I like wilderness and the beauty of simple things. I grew up near a bunch of uncultivated rice paddies in Trivandrum. I spent a long time building a pathway through the chest high (imagine me at 12) weeds. It was wonderful when you were happy just to see a couple of six inch fish in the muddy water and just spent hours wading in mud. Oh, I was a failure then - but I was happy. The trip up the hills sort of got nostalgic for me, especially since Yathin was looking for waders.

Sadly, the mountain was way too cloudy for us to go all the way up to the top. But we went up half the way till the 14th curve and came down. Mainly because the car was running out of fuel, what with the extra people and all that. The descent but was much more interesting than the path uphill - especially since Yathin drives likes a rally driver (or F1, depending on the road you're on). Imagine rushing downhill at over 80 KMPH in the rain (if you can't, download the video). 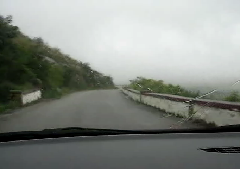 We got back in time for the party and it's highlights. Especially our HR head and the entire team dancing to the jitterbug. More importantly, we went back for the food. Food is never one of my top priorities when I go to a party. Mainly because I'm a veggie and all I can hope for are paneer tikkas and lots & lots of desserts. Anyway, I was in Shortest Queue First mode of eating - had dessert, rotis and then dessert again. It was good veg food, but thanks to the lack of chairs I ended up in front of the fish quite a few times.

One of the best things that happened in the event was that bluesmoon and gnuindian won Yahoo! Ratnas. Both were well deserved in my opinion. Philip has really worked his ass of (read Is there anyone home ?) for his projects. And on the other side, if someone can keep lunatech and spo0nman working (nearly willingly) for a year or so, he deserves an award.

Then all hell broke loose, as sabiokap won the Resident Yahoo! award, Premshree won the Whiner award and spo0nman won the Spammer award. And in the great tradition of The We're Right awards, we gave out the Best Teemus of the Year 2005 and For proficency with a Spoon and no lemons awards. They were well recieved.

For the rest of my photos, like spo0nman in a skirt, hit the photo sets.