Fate of All Men

For almost two years, I've been trying to explore and understand the social situations which have slowly built up the strict roles assigned to the sexes. From the husband trying to bring home the bacon to the housewife packing lunches for their children, it has somehow always struck me as a social conformity rather than a natural state of affairs. But with every bit of new knowledge I gather, I have come to understand that this is merely a snapshot in the life of mankind (womankind too). With all that in context, I bought yet another book on genetics - Adam's Curse. 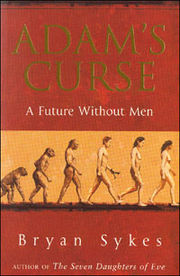 We are all born women. Until the sixth week, a foetus is developing identically for both sexes. But why do we men need to exist in the first place ? As it turns out, there are other genes that exist in our cells than the nuclear DNA that we commonly exchange and intermix during reproduction. The reason men exist is because when two normal haploid cells combine, the two cells' mitochondrial DNA end up fighting to their death. Somewhere in the dark distant past, the cells discovered that they could fix this match by depriving one cell of most of the cytoplasm. Those crippled cells, with a few mitochondria churning out O2 free radicals and literally burning themselves up ended up as representative of the male. And they basically fought the system by making up for that in numbers.

But that can't be the only reason to have all the rampaging testosterone fuelled men ? Well, it turns out that the mutation rate is much higher than in the other gamete and it all explodes into randomness. The Y-Chromosome is the only record of this chaos, since it does not recombine with any other and reduce the mutation damage done to it. It is on a slow but sure path to ending up as completely damaged junk DNA.

With the current population and extrapolating the mutation rate over the next 5000 years, the Y-chromosome would have to be exceptionally lucky to survive that many cell divisions. Unless our non-Junk segments of the gene pattern managed to cross over onto some other chromosome,the Adonis Chromosome according to Bryan Skyes, the future of men is a dead end.