Today was Yahoo! Bangalore's hack day. After having literally killed myself debugging spidermonkey js magic for an entire night, this was my chance to actually let the world see my cute little application run real Konfabulator widgets. The hack itself isn't too spectacuar, it merely combines some widely available libraries, spidermonkey, zziplib, libgdk, curl and libxml2, to run the widgets. Unlike all the efforts of dotgnu, there was no complicated binary formats, nor were there any limitations of performance. Basically - it just worked.

So after pulling in a few widgets and throwing out all the animation and other eyecandy stuff out, I was able to get a decent group of widgets working. The most spectacular of which was the Yahoo! News Reader. Here's a screenshot with corresponding clickys for the widget sources. 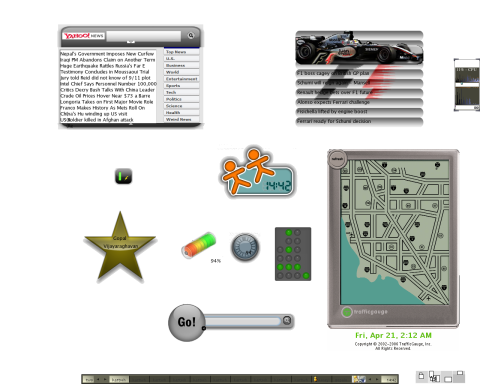 But just like all my other efforts, this project was also DOOMED. And just like all the other screwups that punctuate my life I have nobody but to blame but me. I did a hurried demo of the application using a windows machine via VNC. I was probably too negative (as teemus pointed out) or maybe I was all hung over from not sleeping, it was a lukewarm performance at best. I expected the code to speak for itself and I failed to impress anyone with the potential of this hack.

For a few moments, I felt crushed. From that point onwards, there was only one path to closure for the whole project. I had to throw away all that code and keep walking without a glance back. I know I have the strength to do exactly that and do it without flinching. And I did it.

Even if I'd kept this codebase, the world could've never seen it opensourced as it is a competing with a Yahoo! product. But the code isn't lost to the world completely. Two people mailed me asking for the code and I sent them the code as an attachment. But for their mailboxes, the world has no trace of kartwheels now.

I do not know why, but I feel liberated.

--
"Plan to throw one away. You will anyway."
-- Fred Brooks, The Mythical Man Month