I don't want to die

This is not something I ever tell myself. Usually at least.

In fact, I've often said the opposite in anger and sadness.

Being alive is such a lazy thing to accomplish, that it takes no effort to do it. But nobody is going to call it effortless. Often, it takes effort to find ways in which life is worth living; To raise your voice enough over the default drone of everyday life and tell yourself that "I'm alive!".

But for a thousand miles now, I've been hearing it loud and clear over the roar of my motorbike. 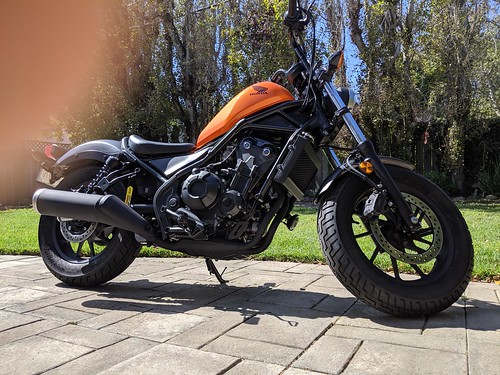 Maybe it is about gratitude. Every day I get on the bike and come home safely, I am grateful. There's a sense of relief to be released from that level of focus, which is overpowering.

I've got a California M1 license since 2015, but I've held off on owning a motorcycle because I have a long storied history with them.

Since I turned sixteen, I've loved riding motorcycles. My Royal Enfield was the most expensive personal posession I ever had. Actually it was almost as if I was posessed by it. All of my injuries as an adult are from riding motorcycles. Still remember every single slide in slow-motion, the world going round around me as I roll out of the way. My chin has scars, my elbow does, my palms too, my knee got torn & will never be the same. Very rationally, when I'm not riding one, I'm utterly terrified of falling off one.

But when I'm on one, I'm entirely occupied by the act. There's no room for any indecision, when you got in too fast into a corner. There are margins for error, but that's what you're trying to avoid. Every move is tied to everything else - your bike will go where you look. Look at a car that's in your way and the bike will clairvoyantly drive you towards the obstacle. And unconsciously you are always looking for the way forward and never at the obstacles. Stare at the abyss and the abyss takes you.

There's enough braking and there's too much. Sometimes to go left, you have to turn right. To turn fast, you need to brake a little. There are no measurements, only reactions to train for.

Panic and you do something stupid. Everything around you turns into smooth curves, even those little bumps in the lane you are splitting turns into a slalom between cars. Smoothly, slowly, surely turn your mind away from fear or anger. There's no room for hurry, but all the space for speed. There's forty horses to push you as fast as you want, ten seconds of smooth shifts to 60 through a merge lane. Easy does it.

Riding my bike home is like a high stakes version of meditation.

Calm down or die. And I know. I don't want to die. We all have to, but at least, not like this.

--
For life and death are one, even as the river and the sea are one.
Only when you drink from the river of silence shall you indeed sing.
-- Khalil Gibran, "On Death"

A Pox On Both My Houses

It is the summer of 1994, I'm in a room all by myself. And the room is bolted from the outside, for everyone's safety.

I'm twelve and angry, because obviously nobody loves me. In my anger, I've also bolted it from the inside. My father is outside, telling me to open the door, but go to the bathroom & wash my hands while he's leaving my lunch next to my bed. He's losing his patience, but I didn't have any to begin with. And that lunch he has, it's going to hurt to swallow - my throat hurts, my gums hurt and to make things worse there is no salt in any food. My mom has made a different dish for me with something like salt (ഇൻഡുപ്പ്) in it, but it tastes like licking copper (it's really magnesium and potassium, but who cares).

I've been quarantined, because I have chicken pox, a slightly virulent strain of it. And I had carried it home. This was my punishment (I thought, unfairly).

It is summer, it is very hot right now, a stillness in the valley that a hot day brings. I'm not feeling the heat, because I have a fever. I almost dread the time when the heat will go away in the evening as the sea breeze picks up, because then the silence outside will be replaced by kids playing cricket. I can't even watch, the windows in this room are for ventilation and five feet up the wall.

I'm not in my room - I didn't have a room anyway, I slept on the floor in the living room. But this wasn't that bed, this was an old folding bed that sagged in the middle and turned me over onto my back no matter which way I tossed and turned. This is the room where my uncle used as his storage room, some of his cardboard boxes are still in the room. There's no human contact, which was shocking enough, but there was also nothing else to replace it with. There's obviously no TV in there - it's not like someone could put one there either, it is all hard-wired from the antenna on the roof to the living room. There are exactly two channels, so it wasn't going to be enough anyway.

No books either. And that was really what drove me insane. I had spent the past two summers going through two books a day. I even had a check-list of every Enid Blyton, Nancy Drew and Hardy Boys book, so that I could cross them off and my dad wouldn't bring the same book twice from the library. I was just graduating onto PG Wodehouse and my dad very decisively said "No library books, you're contagious". That wasn't idle speculation, I had already passed it on.

I wasn't quite patient zero, just the one at home. My uncle had returned from Bihar after a year, only to reach my grandparents' house & fall sick. I'd spent the past day in the same house and I got kicked back to my parents almost immediately once my uncle was sprouting whiteheads. I had my maternal grandmom's house nearby, but my dad pulled me home because that house had all the other kids as well. The drama wasn't without twists though. I had my mom's uncle from the other side of her family visit our house in the summer & head to the beach with me. His daughter is just a few years older than me and I was sitting in the backseat with her for the whole ride. Two days after I had symptoms, she did too. And she's already gone back where all my other cousins are, almost next door to patient zero.

So that now spread to two, through me (and more to follow). My dad had already suffered through chicken pox years ago and he was the only one who was immune at home. However he was even more afraid of being a carrier through the family, because there were three people at home who were not. His immediate instinct was to isolate and keep me away from everyone else, including authors from the 1950s, though I wasn't in favour of the second idea at all.

In a week, I had gone from eating icecream in Kochi to being locked in a storage room with a camp bed with served bland pre-mixed food. Oddly enough, the last part also hurt my sense of being "taken care of", because to sit down at a meal already served was considered a faux pas in Kerala. This is what happens to the untouchables (of which I was now one, at least temporarily), who got their charity meals after everyone had eaten their fill (which might not have happened to me, but how could I tell - I imagined the worst of everyone by then). Didn't matter to me that my meals were custom made to reduce my osmotic pressure inside cells (low sodium) and without any spice (sores all the way down the throat), I felt pushed down and oppressed. That indirectly feels like a turning point in my world view, giving me some humility at least temporarily.

By day 12, my dad's attempts at quarantine has failed. Everyone at home is sprouting poxes - I'm no longer sick, but merely healing from this. But by this time, the unit of isolation is the entire house and not the little storage room anymore. There is now a whole family sitting down watching TV every evening, the newspaper is read by everyone, the good bathroom open to all, all meals eaten together with food served on demand. The food still sucks for all the sick folks, but I'm angry enough that forgotten that's why I was angry - I have a little jar of pickle, salt in which tastes like heaven (I still buy the same brand of pickle 25 years later, had some for lunch while writing this).

I've never been so angry before - it took seven more years for me to stop being so angry at everyone unspecifically. As a little kid, I felt like I was owed at least an apology for being locked up and forgotten - which was not exactly what they did, but what I felt. Also that my sister didn't go through it despite having the same contagious disease felt like rank unfairness.

By now I was the healthy one, perhaps even a bit better than I was before. But what I faced next was another week of mandatory isolation, because the house was still under lockdown.

A few days before I was sick, I had gone for an intro class with a new math tutor who wanted to see me before accepting me as a student when the year began in June. He gave me a couple of algebra problems and proceeded to nit-pick my work out to hell, in detail and without stopping. I was doing the math right, but he had criticism I wasn't expecting at year 11 of my life - that I write my equals bottom line first, that I write my nines wrong like an upside down six from the bottom, that I write my zeroes clockwise (advice that wasn't wasted, look at my website's logo). On top of that now, I was bored out of my mind. My dad gave me some advice from Orwell, that the cheapest hobby is writing, pointed out Gandhi's best work was when he was in jail and handed some loose leaf paper & a pen.

So there I was, bored out of my mind, with a blank sheet of paper and thinking about nothing.

Until that very moment, I had never truly experienced the stillness before action. To truly pause, collect myself before pushing into a single direction with all my abilities. The fuel was the wrong one though, I was powered by anger, redirecting it into a singular purpose, turning the torchlight of my brain into a laser ready to cut through anything in its way. If I had encountered God on my way out, God would've been cut.

I've had those moments of silence again in my life, the pause and resurgance into life, but always in anger.

All I wish for as I get older is to burn something less polluting.

--
Anxiety, the next gumption trap, is sort of the opposite of ego.
You're so sure you'll do everything wrong you're afraid to do anything at all.
Often this, rather than "laziness" is the real reason you find it hard to get started.
-- Robert Pirsig, Zen and the Art of Motorcycle Maintenance