I've been a great fan of Terry Pratchett ever since the day I started reading the Discworld novels. Rather than raw fiction, it is philosophy, social commentary and a sprinkling of cynicism, which makes his books so enjoyable. The last in the line of books is Thud! (read it to get the Him diamond quote) started to read the Science of Discworld and sort of looking around for Wintersmith. So just out of curiousity, I started counting the Pratchetts I've read and as it turns out, I've read 42 of them. Here's a quick list of what I've read (in no particular order). If you liked Douglas Adams and wanted him to be more Tolkien, while making fun of the modern world - pick up a Pratchett, any one. 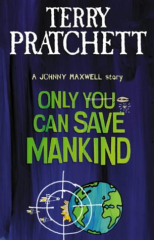 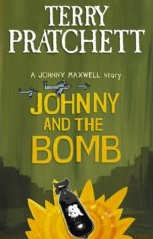 And Earth is a Libra

I picked up Good Omens a while back. The reason I bought it was because I saw the twin pairs of the hardbounds and in a moment of book lust decided that I'd buy the paperback. And a few feet away, perched on top of a bookshelf was the cheap paperback edition. From desire to demand and satisfaction in five minutes.

The moment I opened the book and read the first three pages, I knew I needed this book. The last time I felt this pulled in by a book was when I read the this is not her story in H2G2. These are those fateful lines - read them and understand.

The basic idea of antichrist as being neither good or bad, but merely a mass of potential was interesting. Especially interesting are the side jokes, like Death's comments about Elvis or the hell hound transformed into a mongrel. Also there are the philosophical question of an angel and a demon co-operating as is observed between solidiers who have more in common with each other than with their superiors. Side references to the uncertainity of the result of Doomsday also raise questions about religion without directly denying the omnipotence of God. A lot of interesting things compressed into a paperback, and that's why I like it.

Also got my hands on the The Truth, which is quite in the league of Going Postal. Quite enjoyable, except for the portrayal of Sachrissa which could've been a little toned down (bosoms and black dresses, y'know). And quite an interesting insight into the world of Unorganized crime in Ankhmorpork. That book was hard to put down but when you're through you're through. The typos in the news paper motto was funny - the truth shall set you fret and the Worde family motto - mot juste.

Now, I have Thud left to read. I guess I'll wait for the paperback to come out.

I finished reading The Last Continent over the weekend and was wondering where Pratchett went wrong. The book is a lost cause in philosophy - complete with a God of Evolution, the continent EcksEcksEcksEcks and Mrs Whitlow. Then there's the obvious parodies of Mad Max and Skippy the Bush Kangaroo.

The book is a rambling mess in terms of plot. The faculty of the Unseen University is stuck on a small deserted island and then we see Rincewind saving the entire continent of XXXX. There are some funny moments in the book - but they are few and far too sparse. Evolution by itself isn't funny and neither is the God of Evolution, especially when the wizards try to explain Sex as a way of reproduction to him. The part about the epitome of creation being the Cockroach was indeed funny. But all of Rincewind's adventures are too obvious and saving him from danger,Deus Ex Machina, in a diety in the form of a Kangaroo. The vegemite (I had eaten some while in NZ and *yech*) and sheep stealing parts just do not belong in the story either. But there was one really profound joke in there :-

Origin of the name EcksEcksEcksEcks for the continent.
If it had been called BEER, they'd have trouble spelling it after the third.

The book looks as though it was written while Pratchett was on vacation in Australia. I wouldn't really read it again unless I was on a desert island waiting for a boat.

--
'I'll tell you this!' shouted Rincewind. 'I'd rather trust me than history!'