And then I read Dorothy Parker

Poetry is not my forte. But even my prosaic soul was stirred up the caustic wit and wordplay of Dorothy Parker's poetry. My first run-in with her poetry is thanks to spo0nman, who showed a single verse about three months back - that one verse remains scrawled on the corner of my whiteboard to this day.

Ah, poetry like such has to be read again. The flash of brilliance on the last line, twisting everything said before into its opposite. To lead you down one path of thought, only to yell - Ha, you didn't see that coming is hard to do with poetry. Yet she does, but not without sacrificing brevity or any of the other flourishes that poets are wont to do.

There is a certain cynical poke at the foibles of mankind, of the ephemeral pains of the heart, of the dissolution of the soul, which says more between lines than the average page of a novel, yet compressed into verse. There is a certain bitterness in her work, but one not borne out of sadness, but of defiance at a world which disappoints. Yet somewhere, we see a hopeless paradise carved out of this world with knifes and daggers of cynicsim. And still, to give up sadness is not an easy sacrifice to make.

But there is humour and fun in this hidden - but only for those whom it comes unbidden. It is not quite verse that I penned, but in my life worse I have sinned. Inspired me she did with her sorrow, but with an ounce of talent of hers to borrow (for it is a poor poet who does not inspire). 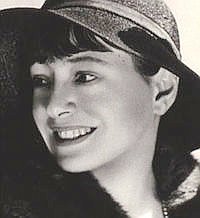 The themes are slightly odd for a contemporary of Wodehouse, verging on the suicidal, bittersweet and mordant. But the soul searching gives way to girlish glee in such twists that this reader is left speechless. The gift of repartee is unmatched except perhaps by Nancy Astor on the other side of the Atlantic pond.

Thankfully, a fair bit of her work was done before 1923 which means that the copyright restrictions no longer apply to the work. You can get a fairly large collection of her poems from Poem Hunter as a very convenient pdf file [650k]. Take a good close look at some poems in there like the Burned Child, Recurrence, The Evening Primrose or Surprise.

And it still echoes back But alas, we never do ...

--
Four be the things I am wiser to know:
Idleness, sorrow, a friend, and a foe.
-- Dorothy Parker

The year is 1986 and it is a hot and humid April morning. I was lying around in hospital bed feeling bored beyond imagination. My parents were still trying to plan for my sister who would be born in a few day's time. I was past the sick phase and quickly moving into the hyperactive run-around stage that is often the bounce back of the sickness.Amidst all the turmoil, someone presented me with a book - a simple twenty page book of poetry. I could barely read malayalam at that point, I could read the letters but not fast enough to actually read out.

That book was Kunjunni Kavithakal. I read them more from boredom than actual interest - but I was hooked. At first glance the words were simple, but now that I look back they meant a lot more than a dictionary would reveal. But even to a literal minded child the poems were entertaining and even more importantly easy to remember. I still remember some of the lines I read twenty years ago.

More vividly, I remember meeting O N V Kurup on a train to cochin, a month or so later. We are distantly related by someone on my mother's side and my maternal grand parents, who were with me on the train, knew him. He was basically taken aback when I said - " I don't know about your poetry, but kunjunni mash's poetry is Poetry ". Of course, after ten more years of learning malayalam (and maybe ten more of ignoring it), I still haven't changed too much in opinion - which may not be a good thing, but that it.

Maybe that's what I miss of childhood, to enjoy the simple pleasures of life - paper boats in the rain water, raw mangoes with salt and hide 'n seek at the tharavad. Hearing of his death brings back memories of other things lost and certain smile at a paradox of pokkamillayma aaNente pokkam.

--
In this world, nothing is certain but death and taxes.
-- Benjamin Franklin