My sister is getting married tomorrow ...

And the more I think about it - I'm even more concerned.

I'm concerned that her apathy towards her career will be the death of it. That she will end up being a homemaker, after having a gold medal from NLS. That she will end up succumbing to the social pressures of being a Mrs Somebody. That one day somewhere in her middle ages she would regret her simple surrenders. That if she's wilfully ignoring the springboard of opportunity that so many of her peers don't have. That she might be decieving herself into becoming the role model wife and bahu - and fail. That she'll lose something precious and ephemeral - the fire to burn as bright as you can.

And in some way, I'm saddened.

I'm saddened that whenever she explains her idea of relationships it is to suffer for the sake of her partner, to be with him whatever it takes at whatever cost to her potential. That I couldn't pass off my own ephiphany about love and relationships - that it took me further ahead than I could've done on my own. That my efforts to fulfil my dad's hopes for her weren't enough - simple enough as they were, to see her "breaking through the limitations society might impose". That she won't see that in some way or the other, I've been on her side for twenty odd years in the case of Sister vs The World, 1986-present.

I'd don't think I'll ever stop being concerned about her - she's my baby (sister) too.

But in more than one way, I'm happy for her. And proud of her too.

She's marrying someone of her own choice - after six years of knowing each other. And it's happening out of co-operation between both the families. She's doing this completely out of her own volition, dreams and desires - which is what will truly give her the strength to push through when push comes to shove.

Also, she's been known for making me look very stupid - which this blog post might do in a couple of decades.

--
Marriage has some thorns, but the alternative has no roses.
-- Vernon K. McLellan

The last time I drove my bike fast was in June.

No, that's not true. I drove it fast today. Too fast, perhaps. But that leads me to another question, how fast is too fast? I'm not talking about the speed limits or the consequences of speeding. I find that my sense of speed is completely off depending on what I'm driving - I've hit 65 on a bicycle downhill, on a 75cc two wheeler, on a 350cc cruiser and of course, in various cars. The sensation is very different, but in reality the speed is the same. So, in a rather objective sense, can I tell my brain what my driving speeds really mean?

I've always been wary of heights - though not exactly when I've been climbing. I've jumped off enough tall things to have a sense of how it feels. Maybe that's the way I can explain this. Let's take 3 different speeds and work out how they feel - in "jumping out of the window" terms. 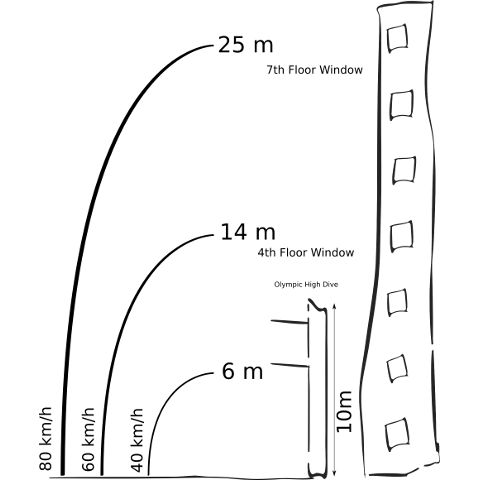 The calculations are rather trivial.

Now, the numbers clearly indicate the height goes up to the square of the speed you're driving in, rather than than linearly (duh, kinetic energy is proportional to the square of velocity). But what does scare me is what I've added for perspective is an olympic high dive, which sort of looks like this. Not to mention, you aren't going to be hitting a nice deep pool of water.

And I still drive fast.

--
It is impossible to travel faster than the speed of light, and certainly not desirable, as one's hat keeps blowing off.
-- Woody Allen