In response to CVE-2008-1488, APC 3.0.17 has just been pushed out with the requisite security fixes. But in the process of producing a php4 compatible release, a significant amount of code has been reverted in the merge into an APC_3_0 branch for future bugfixes.

I've spent a couple of hours unmerging my "bye bye php4" cleanups with the help of Kompare. And my sanity is simply due to the fact that I can "cvs diff -u | kompare -" to look at the resulting huge patch. But it is not unpossible that the new code merged from HEAD has regressions, so you could also apply the unofficial patch onto 3.0.16.

--
I took your advice and did my own thing. Now I've got to undo it. 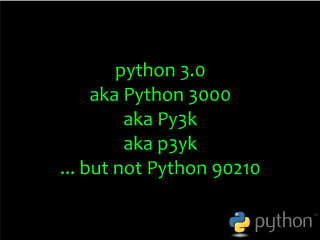 The last keynote from Linux.conf.au was about the upcoming Python "We'll break all your code" 3k. Perhaps not quite keynote material, but it covered a gamut of issues which will break old code when the move happens - and he did work for a colorful company. The set & dict comprehensions, function annotations and dictionary views are probably worth the terrible loss of reduce(), my favourite companion to map(). And obviously old style classes & string exceptions were excess fat to be trimmed anyway. But there was more interesting code to test.

And check the output twice.

--
I believe a little incompatibility is the spice of life, particularly if he has income and she is pattable.
-- Ogden Nash

I was there, but I didn't talk. Didn't sit around either. Yes... I stood behind people.

And then, I came back. With a somewhat odd feeling at the back of my mind. Somehow, unlike all the other years, this year it felt more like a JNU event, rather than an ILUG-D event. What with the focus shifting off software into the rather vague (for me) realms of freedom. Maybe it was the conclave or the dinners, it didn't scream out ILUG-D like it used to - but that may not be a bad thing, per se.

Shall just have to wait and watch.

--
In this country we enjoy many freedoms; freedom of speech, freedom of thought and indeed, the freedom to do neither.

Would You do it Again for Free?

Occasionally, I do wonder why I do what I do, especially with software. The answers I've got with might not make sense to everyone - actually, it no longer makes too much sense to *me* today. But one thing's remained the same - it wasn't the money then and it isn't money now.

Everyone admits that more money helps (talks, walks you home and even buys you dinner). But the question at hand was whether money, more accurately, the presence thereof, hurts open source projects. And Stormy Peters began with that question, into her LCA '08 keynote. 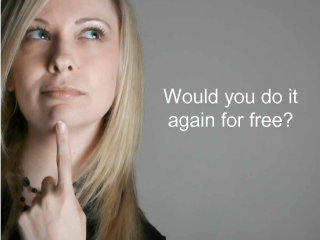 The internal motivations to write F/OSS usually are weakened when there's greenbacks flying. Not to mention money brings in the people who herd it, from the clan of MBA (not to be confused with N.W.A). The processes and rest of the beasts of communication, reports and roadmaps which follow aren't necessarily bad, but they aren't "fun". But even when hacking hasn't been instutionalized, money is a selective reward, which splits the community into those who are paid and the rest. Dunc-Tanc is a classic example of this divide in action. And I'd personally lost that rush the moment I start equating efforts to money - there's a stress level which you can't pay me to take up, but in which I used to live day in & day out.

Stormy Peters takes on the topic from the point of view of someone actively involved in funding open source projects & developers. Occasionally, I run into clearer insights than mine, but conclusions I gathered from the talk are something to a closer look at.

Once a f/oss developer, always a f/oss dev. Even when you've gotten off the rush for some project, pushing it along as a good engineer, the hacker in you doesn't sit around. So, even if you don't do the same for free, it's very likely you'll do something else for the same reasons you did it first - look at the ex-Eazel folks. Anyway, history might just rhyme or pun, or maybe people just go do the same again ( *cough* Gnome Online Desktop), but whatever they already did - is not lost.

Anyway, to the objective reader, I'd suggest that you ignore my blatant bias in the above post and go watch the video.

--
It's classic percolate-up economics, recognizing that money is like manure: It works best if you spread it around.