Apparently the median for my office persona is a straight faced automaton. But about a fortnight ago, all that changed. I realized the obvious solution in one of those moments of lucidity - "don't worry". It might sound simple, but it takes a lot of effort to side-swipe the society's influence to actually say don't sweat the small stuff to yourself. And it takes great tragedy too, to separate the small things from the large and the large from the inconceivable. So here's how the book would look like if I wrote a book about it - which I won't, but I still love the cover (click image for bigger version).

I've generally stopped being upset by small setbacks. Is only life, as they say it. But it took a quite large learning curve before I dropped into this chilled out world, where everything's cool (eventhough it is summer) and I get the important things done right. I guess I'm not the first one to actually go down this path. Rather than say it out myself, let me pull out those words from the pen of Bill Watterson and the mouth of that cheeky six-year-old. 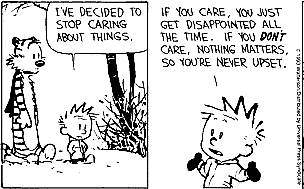 But could that really be ? I suppose so ... it works at this end.

--
"That depends a good deal on where you want to get to," said the Cat.
"I don't care much where--" said Alice.
"Then it doesn't matter which way you go," said the Cheshire Cat.