A Trailer Park of Movies

There are some movies so cool that they can exist only as trailers. While trawling the depths of the internets, I ran into a bunch of them - well collected & catalogued. Here are a few interesting clips from collegehumor.com.

First up is an epic tale of a young man's struggle against the burdens of his conscience. Of someone who's entire life is about not getting blown up. Experience the safety of being a minesweeper, with all the danger of playing it on your own computer in - The Minesweeper Movie.

If you are more into crime thrillers, rather than the war kind, you might enjoy Facebook / Off. An excellent combination of the classic Face/Off with online identity theft. As you might have guessed, this won't end well.

And for those of us who grew up playing "Where in the World is Carmen Santiago?" (smuggled into school on multiple floppies), here's a Quentin Tarantino-esque adaptation, aptly titled Where the F*ck is Carmen Santiago. After all, you'd have a tough time finding out even with the help of google maps. 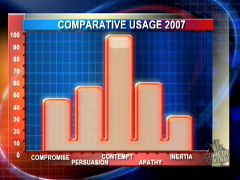 Well, this statistical anomaly is from the Daily Show, as presented by the special correspondent Aasif Mandvi. Somewhat in the same lines as most environmental conservation ads - hopefully the comedy central web-player works for you. It didn't for me - but I found a workable workaround (so to speak).

Apparently, youtube isn't the only place to waste time on the intarweb.

--
The human race has one really effective weapon, and that is laughter.
-- Mark Twain

Driving a car in the US seems to be a complete peice of cake. There's none of the hassles of a stick-shift/clutch system with an automatic shift, the roads are wide and nearly all parking lots are easy to pull a car out of. The new-fangled GPS thingys ensure that I'm never lost and the most reassuring phrase you'll ever hear is "recalculating ...", when you realize you've missed your exit.

So far, I've driven once to San Francisco and a fair bit of the freeway to Mt Diablo. In both of the trips, the hardest thing I had to do was drive up there in the seventy MPH speeds. Driving in India has given me a sort of "expect the unexpected" sixth sense which makes me slow down as I expect merging traffic to cut across my path. Just pure speed does not bother me that much, as I have driven at higher speeds on Indian roads. But that was mostly a dare, combined with suicidal insanity, on home turf - but maybe I'm not that young anymore ?

And then in downtown, I suddenly started driving on the left side of the road. Half a second and screams from premshree & bluesmoon later, I swerved back onto the right. Still have to unlearn a bit of muscle memory that serves as my driving. To actively apply my attention on driving just takes too much effort. The task of getting from point A to point B, possibly passing through point C, can be accomplished with a combination of VTA, caltrain and BArt. And that's the plan, going ahead.

In short - been there, drove that and nearly got a ticket.

--
Left is right and right is wrong.
-- Drive-in India