XML and print_r fun in php

Take out your m4d h4x0r skilz - take a look at the following XML and tell me why parsing fails.

By the way, before you read the rest of it, you might want to read this.

If you didn't already know, you cannot put a '--' in an XML comment. Pretty obscure huh ? Hit this file and see your FF complain.

One of my slide ideas when explaining lightweight drawing toolkits for one the talks I submitted for lb/2004 had an architecture of System.Drawing and explained how a properly done up lightweight toolkit can render widgets on paper with a crayon. Nearly 16 months later, it is slowly happening - though not on paper. 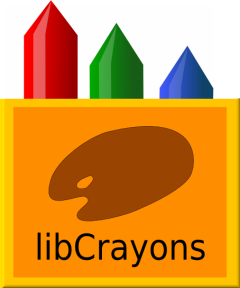 Heavily re-arranged after mDemon was done with it

Drawing logos, reminds me ... There was this one which I draw way back when I started on pnet. Nobody said it was bad, but everyone just ignored it.

If you are interested in working on libCrayons, wait till the christmas - new year is over. In all probability, the lead for that is waking up with a hangover at his apartment right now.

If you see me walking around today, do me a favour - don't ask about Mrs Cake or how I'm feeling today. The most irritating thing about a fever is that it doesn't let you sleep. After 3 hours of tossing and turning, I decided to read a good book or watch an old movie. The book having denied itself the chance by refusing to be found, I turned to the movie option - Star Wars.

I had watched A New Hope on saturday night. I just love osd_cat - All I need to do is "gmake 2> err | tee log | osd_cat -l 16" and I can continue watching a movie while the build just scrolls by on the bottom of the screen. But on sunday night, I was just concentrating on getting sleepy and watched the other two of the trilogy (mostly in fast forward). Sadly, the DVD versions contain the re-re-re-mastered stuff.

Anyway, let me just say that Ewoks were the first signs of George Lucas going bad. At least I can ignore most of the mistakes he made - just because of some of the dialogues I re-caught on the movie. These two dialogues are seperated by over two hours of film tape - but just held on to my brain.

And of course, I just loved Carrie Fisher as Leia. Of course I have to take up my problems with George Lucas when I meet him - especially about the Leia and Jabba the Hutt (is it just me or does he/that look too much like Leto II in God Emperor of Dune).

Even better is the part where Leia and Han Solo watch the re-furbished death star explode.

--
Han Solo: Admit it, sometimes you think I'm all right.
Princess Leia: Occasionally, maybe. When you aren't acting like a scoundrel.